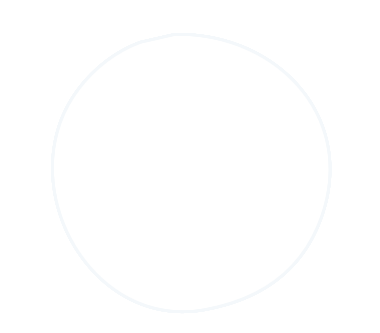 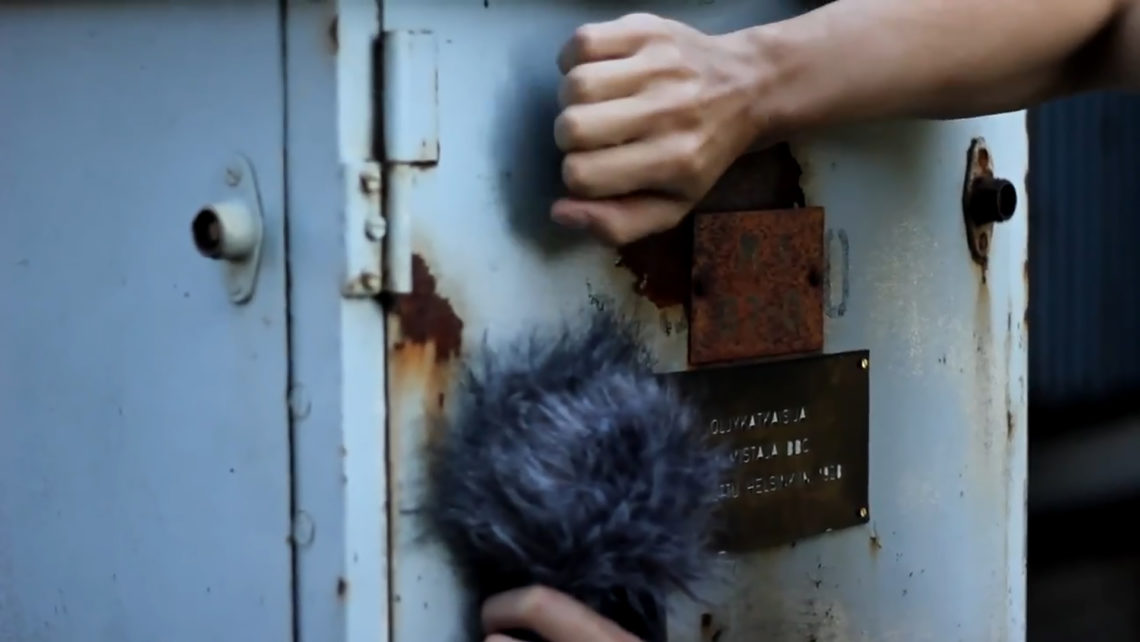 “Interrumors” was an experimental sound project laboratory, which was held at Gil Vicente Secondary School, in May and December 2018, and in January 2019. It was attended by forty teenagers between 12 to 19 years old, of ten different nationalities (China, Vietnam, Nepal, Bangladesh, India, Philippines, Romania, Guinea, Nigeria and Senegal), living in Lisbon, and residents in four neighbourhoods in Lisbon city center (Alfama, Mouraria, Graça and Arroios) – in some cases since a few years ago, in others only since a few weeks. They were all attending classes at the course of “Portuguese as a non-Native Language”. This experimental sound project involved an interdisciplinary work that crossed an investigation into landscape phenomenology, music, sound art and illustration. Our objective was to observe how the urban identity is built on personal and collective perceptions and emotions linked to environmental urban soundscapes. We enquired about the sense of belonging, the redefinition of the affects, and the review of the memories of the place through the observation of sound experiences, sound memories, and the emotions linked to them. We also divided the topics of sound exploration in four axis: (1) Language, (2) Memory, (3) Daily Life and Music, and (4) Urban Life. The team that conducted this project was formed by the researcher Ana Moya, from CHAIA, U Évora , Fernando Ramalho, musician and sound artist, and Bruno Santos (a.k.a Mantraste) graphic designer and illustrator. The teenagers carried out listening exercises, collecting daily sounds using their personal mobiles phones. We observed their bodies’ interaction in space, and the active creation of sounds using movement and speech. Our challenge was how to map and represent the teenagers’ soundscape identities located geographically in these four neighbourhoods in Lisbon. For that reason we set up an interactive digital platform (www. Interrumores.pt). 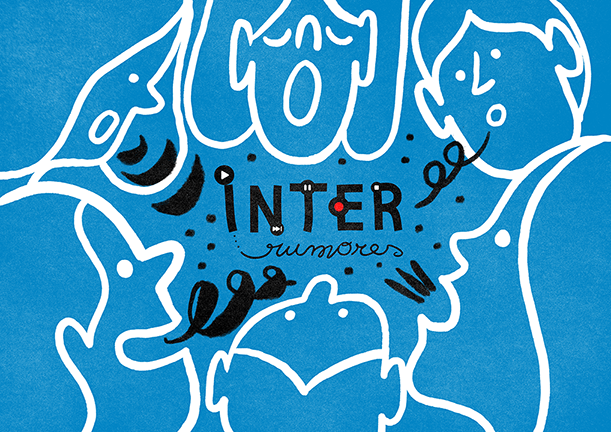 The project “Interrumors” was selected for the NextStop Festival, Multicultural Art in the Metropolitan of Lisbon, which took place in March 2019, at the subway stations Martim Moniz, Intendente, Anjos and Alameda, and it was on display at a Temporary Art Gallery at the same venue until the end of July 2019, and at Intendente em Festa Festival. For this Festival, we presented in each of the four Lisbon Metro stations, a sound installation with the four musical compositions of Fernando Ramalho accompanied by panel presentations made by Mantraste, to allow visitors, using a QR code, to enter in our website (www.interrumores.pt) and the teenager’s interactive sound database.

With itineraries in the neighbourhoods we explored sound, body, and space identity. We could gather sound material for the axis (3) Daily Life and (4) Urban Life. The participants discovered the rhythms of space and the relationship of sound with their own bodies by listening and recording sounds, with exploratory movements around the neighbourhoods carried out both in groups, during classes, and also individually, outside the school, as homework activities in their free time. We recorded, with the use of the mobile phones, environmental sounds as well as the sounds created in the active gestural body movements in space and their own voices and conversations, thus reformulating the role of their physical presence in urban space. As a homework assignment, we asked them to observe and record their everyday life outside the school in their leisure time and share with us familiar sounds inside and outside their homes and in their cultural environments.

In the itineraries in the neighbourhoods the students, apart from recording the environmental sound of the city, at a certain moment, started talking, singing or creating sounds using their hands, feet and other instruments against walls, pavements, doors, handrails, bottles, or trash bins. The students also shared with each other the environmental sounds recorded in their free leisure time, at home or in public spaces. For example, many students recorded sounds while reading, watching TV, playing videogames, playing musical instruments, doing sport activities, cooking at home, singing, or walking with friends in the streets. For example, Suraj, born in India, took us on a sound trip by bike to Martim Moniz square to play with the fountains. He recorded his laughs with friends, his beat box sounds or his conversations in Creole language. He also made music hitting tables and chairs in the square terraces. 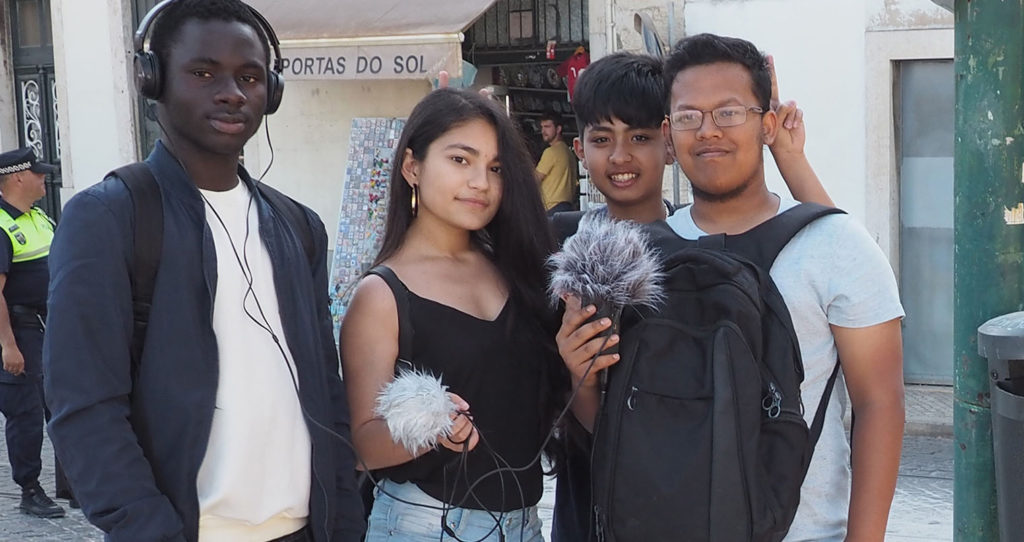 We also explored their inner subjective world, learning about those cultural and memory sounds of their countries of origin, which are part of an emotional heritage that roots the participants to distant geographies, to their past and their family cultures. With the study of the inner subjective world we could gather material for the axis (1) Language, (2) Memory, and (3) Music. We were also interested in their musical tastes, trying to understand to what extent music plays a role in the construction of their cultural identity and in the creation of mental bonds to the urban spaces. We observed how their favorite songs listened through their mobiles, are a soundtrack that filters the perception of everyday life in an intertwining between here and there, now and the past, between distant geographical territories and the city of Lisbon. It was also essential in this project to study the speech understood both as a sound form and as an instrument of communication. We worked with notions such as the musicality of languages and the rhythms of voice and language. We explored the voice and the spoken speech in different languages as a form of disruption and desynchronization that is part of the sound integration of the body and the self in the urban space.

We made games to distress the tension about their languages as a barrier of communication. Crossing conversations in different languages became an exercise of understanding and experiencing vocal sounds rather than contents. We separated speech and language, into a signifier and a bearer of meaning. Other exercises were connected to the reproduction of environmental sounds through their voices and the written transcription with the use of onomatopoeias in each of their languages. In the group there were sixteen different languages, apart from Portuguese (Chinese, Japanese, Vietnamese, Hindi, Nepali, Bengali, Punjabi, Harayanni, Tagalog, Arabic, Wolof, Yoruba, Creole, Romanian, French, and English). We treated these sixteen languages, as sounds, and we worked with them as an environmental soundscape, rich in their tones, their musicality, and rhythms.

The students also made an effort to communicate and share with the rest of their colleagues those memories of personal familiar sounds, which produced them a deep emotion and a sense of nostalgia about the past and about their places of origin. The sharing of all these sounds built a common ground for a multicultural dialogue. We found out that the most frequent recalling sounds of their cultural memories were birds, musical instruments of their places of origin, the bells from schools or other public buildings of their home towns, the sound of specific transportation vehicles, machinery, or specific natural locations with lakes and rivers. For example Zhihao, born in China, presented to all the class the sounds of the Chinese musical instruments of Pipa and Guzheng. He also remembered the noise of the electric scooters and cargo tricycles still circulating around his native city in Wen Zhou. He also mentioned the sound of the red-crowned crane bird. 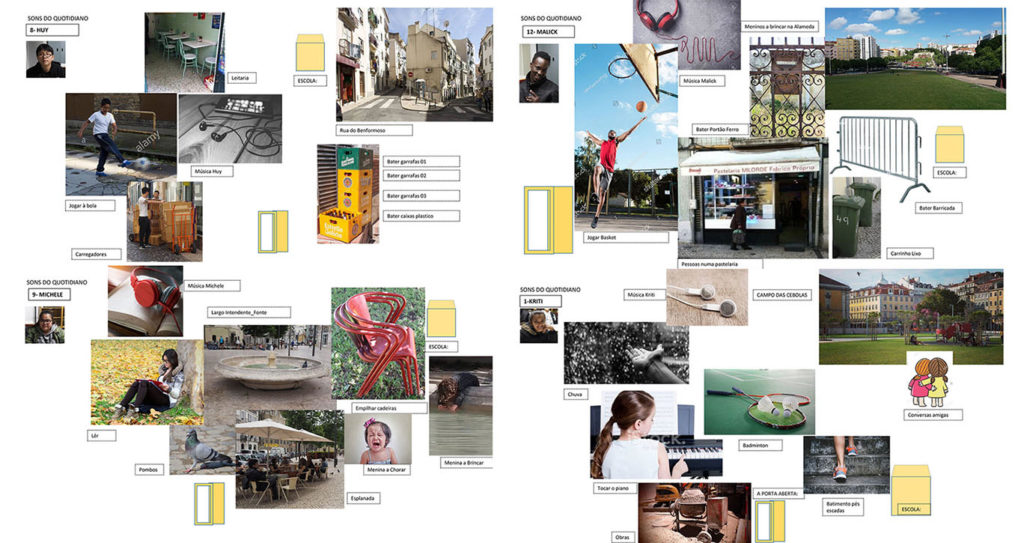 At a final stage, we were interested in the representation of the affects and emotions related to all these soundscapes. We worked the communication of the participants’ sensorial and personal experiences with the creation of visual sound narratives, urban sound atmospheres and descriptive sound scenographies. We asked the students to think how they would represent these sounds into a visual narrative where sound, the physical urban space and their own bodies were intertwined. To help them to elaborate a narrative of their daily life sound environments, we asked them to visualize specific urban locations, and to picture the environmental sound of these places, the sound of their bodies in space, the sound of the components of these spaces and the sound of the elements around those body actions in space.

One of the challenges of “Interrumors” project was how to give shape and organize all the participants’ sound recording database. An exercise of cartography was necessary. Therefore, we decided to build a digital platform (www.interrumores.pt) that would allow us to fix this universe of sound narratives, as well as their interpretation through artistic language. The website was then developed as an interactive and dynamic mapping of sounds, which allows the user to access a labyrinth of visual and sound worlds. In each of the maps we transformed the sounds into a universe of tactile (clickable) illustrations, where faces, places, memories, and daily activities became sounds. The user of the website is not a passive listener either but an active and participative creator. The user can freely mix the available sound database in order to create new sound compositions through the selection, repetition, and mixing of the sounds when being clicked on each of the drawings. 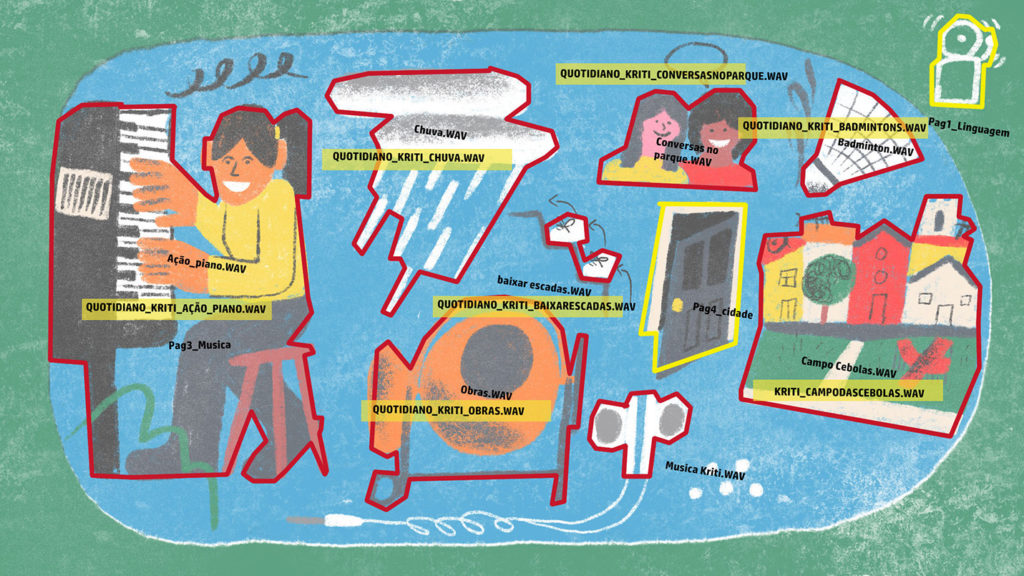 Gil Vicente Secondary School (Lisbon), collaborated, hosted and participated with their students in Interrumors Lab. Largo Residências Association promoted the participatory artistic activities in the context of the NextStop Festival, Multicultural Art in the Metropolitan of Lisbon (2019), under the Local Development Plan (PDL)-GABIP Almirante Reis, funded by Lisbon City Council (CML), Arroios Parish Council, Aga Khan Foundation, as part of the InFusion program, with co-financing from the Asylum, Migration and Integration Funds (FAMI), consórcio (PT/2017/FAMI/210). “Interrumors: Let’s create a soundtrack” was coordinated by the Center of Art History and Artistic Research (CHAIA, U. Évora).